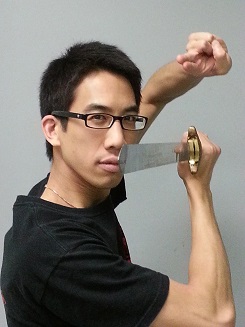 Andrew’s enthusiasm for martial arts started at a very young age and, like many other martial arts enthusiasts, was initially spurred on by Kung Fu films! He had a year and half’s worth of training in Butokukan Karate at the age of 7, and then had a long break before training for two years in Judo at the age of 16. However, his dreams to study Kung Fu were finally realized when he joined Sifu Lung’s Northern Shaolin Academy in 2001! Since then, Andrew has had opportunities to expand his martial arts knowledge and experiences with cross training in wrestling, boxing, Muay Thai kickboxing, and Brazilian jiu-jitsu. He loves training in martial arts because he feels it is one of the most complete fitness packages available. And yes, after all these years, and though he has developed a pretty harsh critical eye for them, Andrew still loves martial arts films!